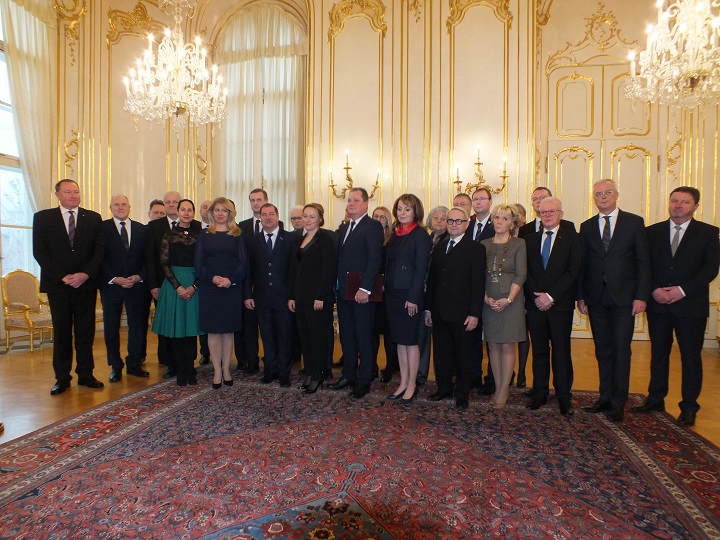 At the ceremonial New Year's reception a wide range of rectors of Slovak universities and colleges were present who appreciated the invitation to the Presidential Palace.

At the beginning of his speech, the President of the SRC prof. Rudolf Kropil said that he perceived the invitation of the President of the Slovak Republic as an expression of her sincere interest in the education of the young generation, but also in science, research, innovation and art. "I believe you will support our priorities in favor of universities, education and progress in Slovakia," he said. Further prof. Rudolf Kropil stressed that the development of higher education infrastructure would be positively influenced by the more fundamental use of the Structural Funds. In his speech he recalled: “Higher education institutions urgently need a comprehensive and modern Higher Education Act that will support, in particular flexible management. In order to ensure the quality of higher education, modern research, as well as to ensure the stability and development of our institutions, we need a number of inventions in fulfilling the mission of our universities in all areas of their activities in the spirit of values ​​of democracy, humanism and tolerance.”

President of the Slovak Republic Zuzana Čaputová thanked for the tremendous amount of work done by universities and the Academy of Sciences in the past period for the society, for the development of scientific potential and for the general development of the population's education and culture. In addition she has wished all teachers, scientists, employees, PhD students and students much success in the new year. She stressed that no modern country could advance without the development of science and education. It is essential that centers of educational and scientific excellence are set up in Slovakia to a much greater extent than now.
Related information:

Rudolf Kropil is SRC president for the third time

SRC session in Bruxelles in 2018

SRC supported the proposal from CPU, HRK and...

This website was created and is maintained by Teacher.sk